The awards, based on feedback from each network’s franchisees, was held  November 27, 2014,  and saw TaxAssist Accountants UK named Best Large Franchise as well as being awarded for Continuous Improvement and 5 Star Franchisee Satisfaction. 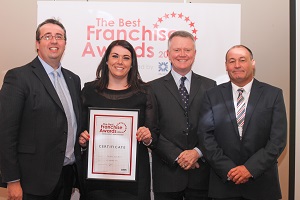 “This is another great vote of confidence from our national network,” said Jody Fiveash, UK Recruitment Manager with TaxAssist Accountants (pictured from left with David Paulson TaxAssist Senior Manager Franchise Recruitment UK and International, Phil Sullivan TaxAssist Network Operations and Finance Director and David Williams from RBS). “We not only maintained the 5-Star rating we were awarded in the inaugural awards last year, we increased our score. The survey asks our franchisees to rate our franchise system, the training and support we provide, our culture and relationship with them, stewardship and leadership and general satisfaction. We’re delighted with the result and will continue to work hard to maintain and improve that level of satisfaction.”

Director Steven Frost said; “Our awards are based on what really counts, the experience of thousands of actual franchisees which means all our finalists already feel like winners because they know how highly rated they are by their franchisees, something every good franchisor strives for. The winners today all demonstrated good training, support, communication skills, support and an active network necessary to build a great franchise operation and we are proud and delighted to be recognising them today.”

Representing sponsors RBS, David Williams, Director Franchising at RBS England & Wales, said:
“The Best Franchise Awards bring together some of the UK’s finest franchisors and celebrates their success and the opportunities available for franchisees. With increasing numbers of new business start-ups, following the franchise route it is vital for franchisors to make their business model stand out and sets high standards for the implementation of the franchise. RBS is delighted to be supporting the Best Franchise Programme and I would like to congratulate the winners of the awards which have all set themselves apart from the competition.”

With a fee bank of over £30 million and almost 200 franchisees across the UK, TaxAssist Accountants is ranked 25th in the UK’s Top 50 Accountants.  The small business specialist is currently looking for accountants and financial services specialists across the UK to join the award-winning network.

The TaxAssist Accountants successful business model is being introduced in Canada this year and is set to launch in Australia, New Zealand and the United States in 2015.